PostgreSQL was first released in 1996 and created in the University of California, at the Computer Science Department. Currently, its development is under PostgreSQL Global Development Group.

MySQL was introduced to the market in 1995, shortly before PostgreSQL. It is an open-source (available under the GNU GLP) Relational Database Management System (RDBMS). Moreover, this database is managed and owned by the Oracle Corporation.

Over the years, MySQL has built quite an impressive and reliable reputation. Plus, it also stands out in the community for its ease of use.

Before moving on to the comparison between PostgreSQL vs MySQL, let’s first understand how ORDBMS differs from RDBMS. MySQL is a purely relational database. Hence the data is stored in a structured format (with columns and rows). Plus, the values within each table can be related to each other, and tables can even relate to other tables.

PostgreSQL is an ORDBMS. These systems consist of a relational model, meaning that it is still possible to relate values and tables while also following the object-oriented model’s principles. Thus, ORDBMS can include the concept of classes, objects, and inheritance.

In terms of structure, MySQL and PostgreSQL are actually pretty similar. They both use tables as their core component, meaning that the data is organized into rows and columns. Additionally, PostgreSQL also integrates stored procedures, views, constraints, triggers, roles and further supports NoSQL. In turn, MySQL offers almost the same features (or very identical ones), and since the MySQL 5.7 version release (2015), it also started including NoSQL features.

PostgreSQL vs MySQL: which one is more popular?

Both PostgreSQL and MySQL are among the most popular databases available in the market. However, to be more precise, according to popularity statistics from May 2021, MySQL is still more popular than PostgreSQL, as the DB-Engines Ranking highlights.

There are many Relational Database Management Systems (RDBMS) available in the market, and PostgreSQL and MySQL are among the two most popular ones. Both options offer many advantages and are highly competitive. Therefore, it is essential to understand their differences in order to choose the most appropriate one for each case.

In that sense, this article provides a deep comparison between PostgreSQL and MySQL, considering aspects such as the data types, ACID compliance, indexes, replication, and more. Further, it entails which one to choose and highlights the importance of considering the application’s requirements.

Currently, both PostgreSQL and MySQL enable developers to work with JSON as a data type in tables. However, things were not always this way. Up until the launch of the MySQL 5.7.8 version, the database system did not support JSON files.

So far, JSON support remains one of the leading NoSQL features that MySQL has integrated. In contrast, PostgreSQL further supports XML, arrays, user-defined type, and hstore, thus offering the ability to operate with more data types than MySQL. The main benefit of having a variety of options available is that it can increase functionality. For instance, by accepting arrays as a data type, PostgreSQL can also offer host functions that are compatible with those arrays.

Nonetheless, despite the benefits of using alternative formats to store data, it can also be more complex to implement such data formats, considering they do not follow a well-established standard. Therefore components used alongside the database might not comply with PostgreSQL formats. This does not have to be a disadvantage, but rather something to watch out for.

When it comes to coding in PostgreSQL vs. MySQL, a couple of differences should be considered. Let’s start by case sensitivity. On the one hand, PostgreSQL is case-sensitive. This means that developers must capitalize strings as they appear in the database; otherwise, the query will fail. On the other hand, MySQL is not case-sensitive. Hence, there is no need to capitalize strings while querying.

Another difference in terms of coding lies in the characters’ sets and strings. PostgreSQL does not allow UTF-8 syntax; thus, there is no need to convert sets and strings to this syntax. Contrarily, some versions of MySQL require this conversion. 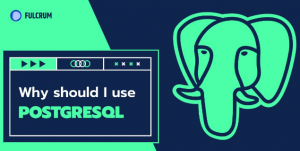 SQL stands for Structured Query Language, and it is considered the standard when it comes to querying data languages. However, it is not necessarily applied in the same way across all database systems.

SQL’s fundamentals are SELECT, INSERT, DELETE, and UPDATE. Additionally, it may also involve some extra features and differences in terms of syntax.

MySQL is only partly SQL compliant because it does not support all the features (e.g., no check constraint). However, it does provide many extensions. In turn, PostgreSQL is more SQL compliant than MySQL, conforming to most of the main features. To be more precise, PostgreSQL supports at least 160 out of the 179 mandatory features.

The more extensive a database is, the more crucial indexes become. When handling tables with millions of rows, indexes can be extremely helpful and can improve database performance. Before looking at the particularities of each database system, let’s first indicate what they have in common: PostgreSQL and MySQL offer support for B-trees and hash indexes. Now that that is clear let’s take a deep look at their approaches toward indexes.

On the one hand, in MySQL, most indexes (PRIMARY KEY, UNIQUE, INDEX, and FULLTEXT) are stored in B-trees. However, there are some exceptions:

On the other hand, in PostgreSQL, the indexes are considered secondary indexes. Hence, the indexes are stored separately from the table’s heap, which is the main data area. Consequently, when executing an index scan, the data must be fetched from both the heap and the index. To solve this inconvenience, PostgreSQL developed support for index-only scans, meaning that developers no longer have to ask for heap access to query an index. Two measures must be followed to apply this method: the index type must support index-only scans, and the query can only reference columns stored in the index.

To make the most out of the index-only scan method, developers can create a covering index. The covering index retrieves every needed column. Thus, it includes the columns that are required by a specific type of query that runs frequently.

Covering indexes only became available in PostgreSQL since version 9.2 (2012). However, by then, MySQL was already using them to retrieve data by scanning the index without having to touch the table data. Last but not least, PostgreSQL indexes support additional features that MySQL has not yet developed, such as partial indexes, expression indexes, and bitmap indexes.

How to start e-commerce Company Registration for Selling Products on Amazon, Flipkart and Paytm etc.?

Focus on Communication and Collaboration